The Resurrection of the Dead

For only $11.95, enjoy this debate between Don Preston and James Jordon as they tackle the tough issues surrounding the doctrine of “Resurrection” from a partial preterist vs. a full preterist standpoint.

This Debate is also available in Mp3 Download. Our download contains all 12 separate sides of the debate between James Jordan and Don K. Preston. 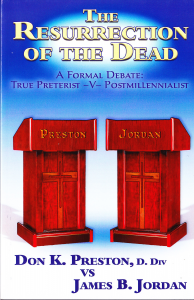 The true or full preterist (fulfilled) view of eschatology has grown rapidly, crossing all denominational boundaries.  Many who are now full preterists affirm that their partial pretrist understandings led them directly to the tru preterist view.  Leaders in the partial preterist world deny this, vehemently.  It was inevitable that the two worlds would collide.  And the have!

While a host of individuals have urged leading postmillennial scholars to engage in formal discussions with full preterists, none had been willing to do so, choosing rather to simply dismiss preterists as heretics.  Books, internet articles, and lectures were given condemning full preterists.  But, there was what seemed to be a “conspiracy of silence” when it came to open dialogue of the issues.

Finally, however, others, of a more honorable stripe, have actually been willing to engage in formal discussion of the issues between the true preterist and the partial preterist paradigm.  In 2003 Don K. Preston was invited to meet, in formal public debate, a man that he had greatly admired for many years; James B. Jordan.  As a postmillennialist, Jordan is erudite, insightful and challenging in his writings. It seemed that such a debate would go a long way in helping Bible students to better understand the issues.  And they have.

In a show of Christian charity, the two gentelmen engaged in this controversial topic, and they both did so admirably.  Now, for the first time, this formerly MP3 audio debate has been made available in book form!  You will find in these pages some in-depth study of the Adamic Curse, the Millennium, the role of Israel in eschatology, the nature of the resurrection, and much more.  This is a must read book for anyone pondering the differences between partial and full preterism.

Categories: All Products, Books By Don, Debate, Under 11 Dollars